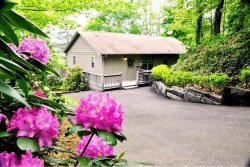 While there’s still plenty of summer sunshine left to relish, it’s impossible not to daydream about autumn’s forthcoming transformation. Every fall, the Smoky Mountains change from deep, emerald green to a vivid blend of colorful hues, including marigold, amber, crimson, and kelly green. Common autumn activities include tree-top ziplining, fly fishing, and train rides. However, we also highly recommend combining nature’s vibrancy with a half-day of Nantahala whitewater rafting thrills. The electrifying Nantahala rafting scene continues to expand as there are now nearly a dozen outfitters in the region that offer guided tours. The team at Great Smokys Cabin Rentals is pleased to announce our three favorite Smoky Mountain rafting companies: Rolling Thunder, Endless River, and Adventurous Fast Rivers. As a collective whole, this trio wholly encompasses the allure of the Nantahala River Gorge.

The whirlwind of sounds, crashes, and splashes procured from atop a river raft often resemble rolling thunder. For much of the year, the Nantahala River Gorge presents shriek-inducing thrills and jaw-dropping vistas. When summer gives way to fall, the surrounding trees are equally a beautiful distraction and a calming delight. And Rolling Thunder’s eight-mile “rainforest” excursion is a bouncy, scenic thrill ride that’s best pursued during autumn’s colorful peak. Because the rapids typically sit in the class I, II, and III range, families are more than welcome to paddle through the river together. Reminder: Rolling Thunder’s Nantahala rafting trips run from early April through early October.

With guided Nantahala rafting trips starting at just $45 per person, Endless River Adventures’ occupancy fills extremely quickly in late September and early October. The Nantahala River is dam-filled, so a lack of rainfall doesn’t affect the flow. A grande finale, which features rippling, cascading waterfalls, is preceded by an eclectic, novice-friendly bevy of class II rapids. Most whitewater rafting near Cherokee, NC, caters to nearly all ages and skill levels—a massive perk for all of you beginners out there!

Lastly, Adventurous Fast Rivers (and its new outpost position in Topton) is the cheapest option in the gorge. Self-guided Nantahala rafting trips start at a mere $16 per person, a bargain that you may not find anywhere else in North America. River rafting in the Smoky Mountains grows more desirable by the year, so please call ahead (or book online) several weeks in advance. Adventurous Fast Rivers’ launch site is downstream from the prior two outfitters; thus, the experience is different in both scope and aesthetic.

Great Smokys Cabin Rentals has a sizable fleet of pet-friendly cabins in North Carolina’s sprawling, awe-inspiring Smoky Mountains. The majority of these Cherokee and Bryson City cabin rentals feature unobstructed mountain views, handcrafted sophistication, luxury furnishings, outdoor hot tubs, private acreage, and spacious fire pits. Browse through our vacation rentals at your earliest convenience to get matched with a cabin that suits your group’s size, style, and budget. Click the links below to learn more about the area and its many attractions.

The Top 5 Things to Do in Bryson City, NC

The Top 5 Waterfalls near Cherokee, NC

Jump to a Rental